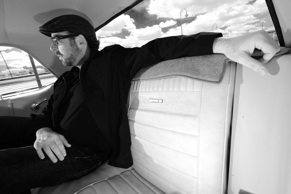 Tony Peters draws from his passion for the rich history and architecture of Southern California.  In the tradition of the landscape painter, he combs the city in search of views that inspire a sense of awe.  For him, these subjects are tattered street corners, train yards, the LA River, and the vast web of freeways around Los Angeles.  Peters was awarded a scholarship to the prestigious Art Center College of Design, and while in school he worked as an assistant

at the Mendenhall Gallery in Pasadena where he met and later apprenticed painters like Richard Bunkall, Ray Turner, and Mark Ryden.  Since graduating in 2000, he has had a prolific career as an artist, with over twenty gallery shows, feature articles in Southwest Art magazine, and private commissions.  Peters continues to travel to Europe and New York, photographing and painting along the way, and finding inspiration in details such as the variety of light cast on the East Coast.  But his first love remains the winding metropolis of Los Angeles, where he continues to be moved by the quiet beauty of a screaming city.

Tony Peters is a Mentor Member of the California Art Club.